After surgery, chemotherapy is currently the frontline method to treat cancer. Although this technique is in many cases very successful, the patients undergoing such treatments often suffer from the severe side-effects associated with the intake of anticancer drugs which usually lack specificity. In other words, the drugs are killing both cancer and healthy cells. In this regard, Photodynamic Therapy (PDT) is a very interesting alternative to chemotherapy.1,2 This medical technique typically results in fewer side-effects as the toxic singlet oxygen which destroys the cancer cells is produced only in the regions were the medical doctor has applied a light source (Figure 1). Nonetheless, the photosensitizers currently on the market have still important drawbacks which include, for example, a lack of selective uptake in cancer cells. 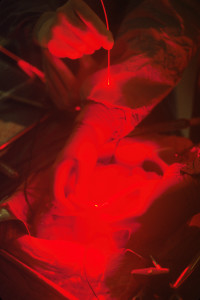 Figure 1. Surgeons’ hands in an operating room with a “beam of light” travelling along fiber optics for PDT.

In this research project, we are aiming to develop new photosensitizers for PDT based on Ru(II) polypyridyl complexes.3-6 An example of a Ru(II) complex developed in our labs is presented in Figure 2. This complex was found to have an impressive phototoxic index (PI) of 150. One of our aims is also to render those complexes more selective to cancer cells. 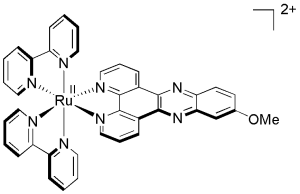 Very importantly, we recently described the use of similar complexes to kill bacteria.6 This is of high interest due to the emergence of bacterial resistance.

One of the drawbacks of PDT is its reliance on triplet oxygen (3O2) to produce the toxic singlet oxygen (1O2). This is a serious drawback since tumours are hypoxic (i.e. they lack oxygen). In this research project, we aim to develop a concept which relies only on the combination of light and a chemical to induce cell death. This concept is often referred as photoactivated phototherapy (PACT). Unlike PDT, in PACT, the presence of oxygen is not required. With this in mind, we recently developed “caged cytotoxic metal complexes”.7-10 As shown in Scheme 1, a cytotoxic Ru(II) polypyridyl complex developed in our labs11 could be release upon photo-irradiation. Importantly, as anticipated, the caged metal complex was found to be not cytotoxic.

Scheme 1. The cytotoxic Ru(II) complex is released upon light irradiation.